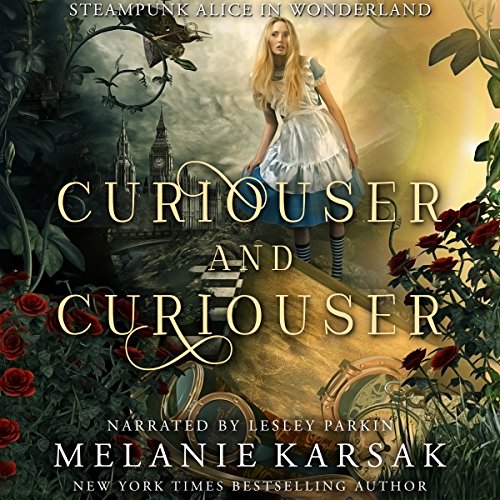 
Publisher's Summary
To save the Hatter, Alice must work with the one man she despises so much that she might still love him.
Alice thought she'd turned over a new leaf. No more working for Jabberwocky. No more making deals with the ruthless Queen of Hearts. No more hanging around The Mushroom with tinkers, tarts, scoundrels, and thieves in London's criminal underbelly. But she'd been bonkers to dream.
Hatter's reckless behavior leads Alice back to the one person she never wanted to see again, Caterpillar. Pulled into Caterpillar's mad schemes, Alice must steal a very big diamond from a very royal lady. The heist is no problem for this Bandersnatch. But protecting her heart from the man she once loved? Impossible.
Sometimes love is mad.
©2017 Clockpunk Press (P)2017 Clockpunk Press


Review:
Alice and her sweet sister were orphans struggling in a London workhouse when they were ‘rescued’ by Jabberwocky. He took them to his wealthy home where Bess cares for his elderly mother and he gave Alice, aka Bandersnatch, tasks that used her nimble fingers. Alice wasn’t thrilled with the work but she would do what she had to in order to care for her frail sister.

Another child who came to work for Jabberwocky was William aka Caterpillar. Alice and William work many jobs together and eventually something goes wrong. Alice and William were to take over the ‘business’ when Jabberwocky dies. Even though it means leaving William behind, Alice takes the chance to walk away from the life of crime.

Alice and Bess are living simply while Alice works in an honest position for a Lord. Bess is being wooed by the Mad Hatter, Henry, but Henry has a serious gambling problem. His actions result in Alice being called back to help William on a dangerous heist. In addition to working with William, which threatens her heart, Alice has to face the Red Queen which threatens her life.

The story is told in present situation with alternating flashbacks to fill in the backstory. I especially enjoyed the characters and phrases recognized from Alice in Wonderland. There is even a Rabbit and a Cheshire Cat. I liked the craft of the Mad Hatter and enjoyed the steampunk elements. The story is a bit dark but balanced by fun characters and struggling romance. I plan to pick up more of the retellings by Melanie Karsak. I recommend this imaginative story to fans of fairy tale retellings and steampunk.

Audio Notes: Lesley Parkin does a nice job with the narration. She gives the characters their own voices and even captures the arrogant ugliness of the Red Queen. The narration gives good energy and enhanced the story for me.


Source: 2019 Credit Purchase. This qualifies for 2019Audiobook and Alphabet goals.
Posted by Martha Eskuchen at 10:40 PM