This story contains a dark, rich mystery of spirit possession in an exotic culture.
Shades of Moonlight
by Karen L. McKee 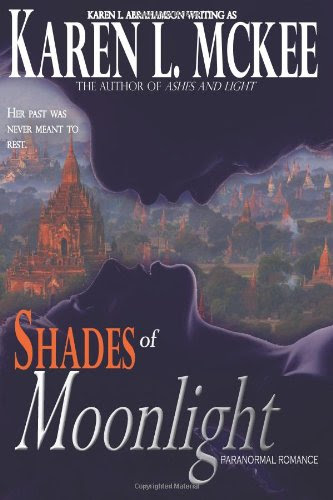 Genre: Paranormal Romance, Adventure
My Rating: 3.75 of 5.0  (4.0 for the story but minus for the lead female character who was annoying for me.)

Book Description
Publication Date: December 5, 2010
When Kalla Jervis, folklorist, arrives in Burma as part of a team of archeologists researching the end of an ancient civilization she expects problems translating the ancient Burmese language. Then she meets her translator, tall, dark and dangerous Simon Renault, a man who both infuriates and attracts her. When dark dreams haunt Kalla’s nights, they hint at a terrible secret that entwines the fates of Kalla and Simon and all of Burma.

Karen L. McKee once again delivers a rich story that evokes the mysteries of an exotic culture. Shades of Moonlight is a fantastic paranormal romance that wraps together past, present and future in one of the most mysterious of Asian cultures. Readers will love the fast-paced story of unforgettable characters caught in the strangeness of a world few westerners have visited.


Review:
Kalla is a folklorist working with other archaeologists to help develop the history of a place through the stories the people tell. She joins a team in Burma where she hopes to rekindle her college romance with the leader of the team, Alex. She and Alex couldn’t make their relationship work due to their competing, controlling natures. Kalla is still fixated on being in control because she thinks it is the only way to protect herself from being hurt by those she loves, like her dad, sister and Alex. She is really intent on winning Alex back because she thinks it will make her dying father happy. Kalla is not prepared to deal with the tall, dark, too handsome and clearly dangerous translator, Simon, who greets her.

Simon is a man of two countries and two beings. When Simon found himself being overwhelmed by a strong, ancient warrior “Nat”, his mother helped him learn control. Simon’s spirit “guest” gleans onto Kalla as his long lost mate causing Simon to have to contend with the spirit’s lustful powers as well as his own interests in Kalla. Simon knows that his spirit-man can be very dark and dangerous so it is a real battle to control him. It is even harder trying to tone the urges down when Kalla makes it clear she is a woman who takes charge and is not a woman to be ‘handled’ or controlled easily.

There is a dark, rich mystery that flows from the past of Pagan, Burma to the people of the present. Some of the players are locals, who want to protect the secrets and treasures of the land while others would exploit them. Kalla and Simon have no ulterior motives towards the country or its secrets but they get caught up in the battle because their own inner spirits and personal histories have brought them to this situation.

Mei, the other translator, is a lovely, gentle-spirited local woman who shows a distinct opposite to Kalla’s stubborn will, yet Mei has her own strengths. There are some romance conflicts and jealousies in the story with Kalla and Mei wanting Alex, Alex wanting Mei and Simon wanting Kalla.

I truly enjoyed the rich history and found the aspect of the folklorist fascinating. The plotline is interesting as well although the spirit possession is rather creepy and scary. What made the story difficult and long for me was Kalla’s character. I would say that her control issues resulted from a lack of confidence and lack of self acceptance which I found very annoying in a woman of her age and with her skills. Unfortunately Kalla’s stubborn control and refusal to trust or accept help from others was dragged out throughout the story in not a good way and adding unnecessary length. It caused her to make stupid decisions and act in idiotic ways which seemed forced at times to help the plot but lessened my enjoyment of the story.

I would recommend this story to those who would enjoy the history and rich tone fitting a dark, exotic culture. The reader just has to be prepared for the involvement of spirit possession and prepared to deal with a control freak female lead.


I received this as part of a Romance StoryBundle a couple months ago. There are three StoryBundles available now offering multiple stories for one low price. I am soooo tempted!
Posted by Martha Eskuchen at 10:44 PM