I liked the characters in this satisfactory Scottish romance.

Chieftain by Command
by Frances Housden 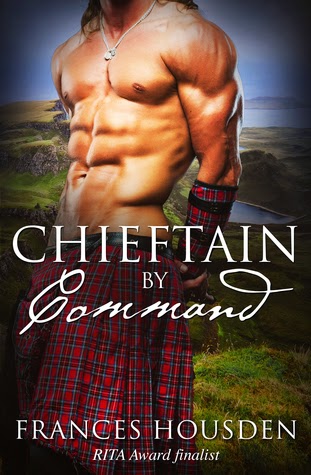 Blurb:
From the bestselling, RITA-nominated author Frances Housden comes the gripping, sensual, suspenseful follow-up to The Chieftain’s Curse...
Gavyn Farquhar’s marriage is forged with a double-edged blade. Along with the Comlyn clan’s lands, a reward from the King, he is blessed with an unwilling bride, Kathryn Comlyn, and an ancient fort with few defences that desperately needs to be fortified before it can act as a sufficient buffer between Scotland and the Norsemen on its northern borders.
Gavyn needs wealth to meet his king’s demands, and he knows of only one way to get it — with his sword. Leaving his prickly bride behind in the hands of trusted advisors, he makes his way to the battlegrounds of France and the money that can be made there.
Two years married and Kathryn is still a virgin. A resentful virgin, certain that, like her father before her, she is perfectly capable of leading the Comlyn clan. In her usurper husband’s absence, she meets the clan’s needs, advising and ruling as well as any man.
But she is an intelligent woman, and she knows the only respect and power she will ever hold will be through her husband. And to wield it, she needs to make him love her. An easy task to set, but impossible to complete, when said husband has been gone for two years, and there is no word of his return. But Kathryn is undeterred. After all, a faint heart never won a Chieftain.


Review:
Kathyrn Comlyn was only fifteen when she was thrust, by the King’s command, into a marriage to Gavyn Farquhar. Kathryn was chagrined and relieved when Gavyn only pretended to consummate the marriage before leaving for France to earn funds needed to fortify the stronghold. Kathryn has managed the affairs of the clan for the past two years but has learned that, as a woman, she can only gain respect and authority as the Chieftain’s lady wife.

Gavyn finally returns home after two years of battling and dreaming about the spitfire, reluctant wife he left behind. His unannounced arrival is greeted by an arrow shot by that wife. Although Gavyn wants to gain her companionship he fears that she may truly hate him and the circumstances that brought them together. He also has to deal with clansmen who view him and his band of mercenaries as usurpers on their lands.

Kathryn has taken Lhilidh, a young girl whose mother has recently died, as her maid. Lhilidh was raised with Nhaimeth, a dwarf, who was always thought to be a fool as a youngster but who has now grown to be a respected, intelligent and loyal man. Nhaimeth is devoted to Kathryn and Lhilidh and his two young friends, both noblemen’s sons in training, Rob and Jamie, keep an eye out for the ladies too. But no one is aware that Kathryn’s two disreputable cousins are plotting behind her back.

I liked the primary characters and many of the secondary characters added to the story. I was glad that there was intrigue and danger, with a few secrets, to fill out the romance. Unfortunately I found the pacing to be on and off, a little slow and then fast. There was annoying repetition in the themes of distrust between Kathryn and Gavyn and their unwillingness to reveal their growing affection for each other. The sexual scenes were also a bit more descriptive than I care for.

Still, the writing is sound with some rich descriptions and realistic emotional fears. Although I wasn’t enthralled, I did enjoy the overall read and would try this author again.


I received this title from Escape Publishing for an honest review.
Posted by Martha Eskuchen at 10:10 PM